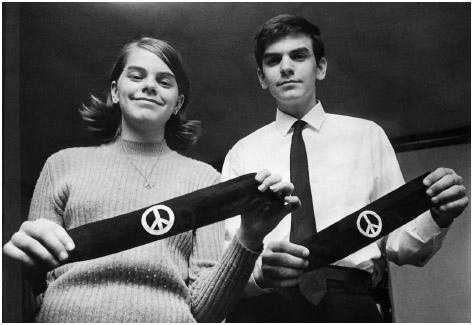 Mary Beth Tinker was a 13-year-old junior high school student in December 1965 when she and a group of students decided to wear black armbands to school to protest the war in Vietnam. The school board got wind of the protest and passed a preemptive ban. When Mary Beth arrived at school on Dec. 16, she was asked to remove the armband and was then suspended.

Four other students were suspended as well, including her brother John Tinker and Chris Eckhardt. The students were told they could not return to school until they agreed to remove their armbands. The students returned after the Christmas break without armbands, but in protest, they wore black clothing for the remainder of the school year — and filed a First Amendment lawsuit.

Represented by the ACLU, the students and their families embarked on a four-year court battle that culminated in the landmark Supreme Court decision. Dan Johnston, a young lawyer also from Des Moines and just out of law school, argued the case.

On Feb. 24, 1969, the court ruled 7-2 that students do not “shed their constitutional rights to freedom of speech or expression at the schoolhouse gate.”